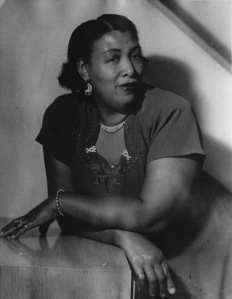 Click the arrow above to hear a complete interview from 1981 (1 hour and 13 minutes), or read excerpts below.
I was brought up in the red house by the pond down there at the Duck Pond.  We didn’t have street numbers then.  We didn’t have nothin’.  We had dirt roads, we didn’t have concrete roads.  And I think the first car I ever saw had a crank handle on it.  And the doctors used to come around with these great big bay horses.  I guess you know what a bay horse is – they’re kind of white and gray and they’re great big, healthy.  And the undertakers used to have them, too.  And my grandmother [Familia “Phoebe” Dumpson] fainted when whe saw the first big building, Bayles’.  She thought she was lost.  She didn’t even know how to get home.  And we was runnin’ around looking for her.  She said, “I never saw that building before.”  Because we never had that big building.
My grandma worked at the Onderdonks, was raised there.  She used to smoke a corn cob pipe and Ivanhoe tobacco.  Well, them days you could buy a pack for 5¢, so when I’d get a penny I’d save all my money till I got 15¢ so I could buy my grandma 3 packs of Ivanhoe tobacco and take it up to her.  And she lived in a wooded section and she could walk all through there.  She had a little ol’ dog.  I said he looked like a little ol’ pig.  We used to have a lot of tramps in Port Washington.  But you couldn’t put a hand on grandma.  Her dog would go for you.
My mom’s daddy, Grandpa, he was a Mohawk Indian.  He always used to say, “My name spells Big A- little A-R-O-N.”  And I always called him “Pop.”  Grandpa was very big, buh!  And grandpa was so cute, he  never washed his face, they don’t wash their face.  They put their hands in the water and just wash their eyes and mouth.
This I had experienced one day: In Mineola, my aunt was going to go see her brother over in Kings Park, so we were sittin’ there waitin’ for the train.  So this great big old bustery woman came and sat down along side of me, and this white lady was sittin’ on this side, and my aunt on that side, so I was talkin’ to the white lady.  “Listen to ya!  Listen to ya!”, this lady on the side of me said.  “I hate you!”  I turned around and I looked at her, and said, “You hate me?  You don’t even know me.  Who are you?”  She said, “I’m a Shinnecock Indian.”  I said, “Oh yeah.”  I was so happy because she said she was an Indian.  I said, “Oh, my grandmother was a Mohawk.”  “That’s why I hate you!”, she said.