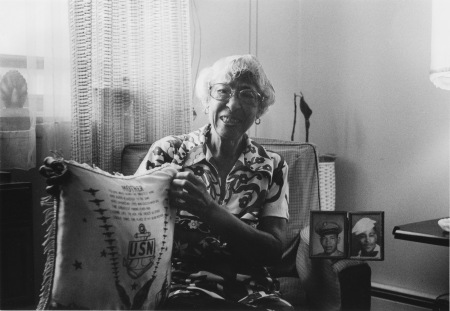 Click the arrow above to hear a complete interview from 1981 (32 minutes), or read excerpts below.
I came to Port Washington in 1947.  You couldn’t go out and get a house like you can now.  There weren’t any decent places built for people to live . . . we lived in a house . . . it was a beer garden.  The woman that owned it turned it into a house and we stayed there, uh, a few years, and she built a new place for herself, a small bungalow, and then when they sold all the place to the government, on that side of the street, from where the Nursing Home is down to the . . . right there where the first house is in front of the store, on Harbor Road.  Well, they tore all those buildings down.  So her house was on there, and where I lived was on there.  But when they started tearing them down, they had built the projects so I got a house into the projects.  And the other houses that was on that side was all burnt up.
My husband, Waddy, came here from Elizabeth City, North Carolina.  He moved from there because he and his brothers and his mother they had bought this big farm . . . 85 acres . . . when the whole family started to die.  His mother died first, and then his sister, and all her children and her husband died.  So everyone died. . . just the whole family died out.  He couldn’t work the whole farm, 3-horse farm, so my father told him the best thing if it was him, he’d just give it up and move some other place.  So that’s what he did.  He give it up and moved to Glen Cove, in 1928, then here in 1947 . . . my husband was a skill’d man; he coud do anything you put him to – if it was digging for the shale or driving off in a truck or crane or anything, he could do it.  We just made out with what he could bring in.  The husband did the going, and I stayed home with the kids.